News BACK TO ALL

When the Hazel Park Raceway, which opened in 1949, closed its doors after 69 years, the community mourned the loss of what was once an iconic business for the city. In serious decline, the raceway and the 95 acres it sat on were purchased by Ashley Capital – marking the end of an era for the Detroit neighborhood, but also the beginning of a new and promising one.

The Tri-County Commerce Center was constructed on the property – now home to Amazon.com, LG Electronics and Bridgewater Interiors – and demolition of the racetrack made way for additional development, bringing an estimated 700 new jobs to the area.

Ashley Capital successfully turned the loss of the landmark into an economic gain, and at the same time, discovered a way to give back to the community even further. As the stables were being torn down, a revelation was made: the wood was dense, southern yellow pine – a sought after and popular species – and it was in beautiful condition.

Collin Graw, Construction Project Manager stated, “When we recognized the value of the wood, we thought, ‘This could be a way of honoring this iconic structure and keeping memories alive by keeping the wood in Detroit.’” He added, “We immediately started seeking solutions to save the wood.”

Though easier to simply demolish and dispose of the wood, Ashley Capital took the initiative to find it a home. They reached out to local businesses and found two that were happy to be a part of their salvaging plan.

“When we got the call, we jumped at the opportunity,” said Sam Constantine, co-founder and co- owner of The End Grain Woodworking Company. “It’s our passion to create one-of-a-kind products using old wood from homes and buildings throughout Detroit.” He continued, “Each piece has its own story, and we make sure it continues to be told instead of getting lost in a landfill.”

End Grain breathes new life into old wood by transforming it into unique pieces of furniture and decor, making a point of engraving the nature of the wood’s origins into every finished product, thus keeping the history of the wood alive.

Said Constantine, “It is such an amazing opportunity to be able to repurpose wood from the Hazel Park Raceway. For many people in the community, there is a vast amount of history associated with this site and we’re pleased to carry on the story through our unique creations.”

After making an initial site visit, Constantine shared that they were in awe of the vast amount of salvageable material available and it didn’t take long to realize they couldn’t pass up the opportunity to create pieces out of wood that had such a great history behind it.

Architectural Salvage Warehouse of Detroit (ASW) also headed to the site to help properly deconstruct the wood and salvage it in support of their mission: to keep environmental resources out of the waste stream, and to make decent, affordable housing materials available to low- and moderate-income families. 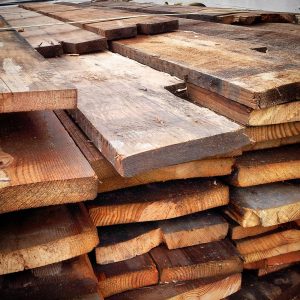 Chris Rutherford, Executive Director of the company, said he too was amazed at the amount of wood they were able to divert for reuse. “There was nearly 300,000 board feet of lumber – that’s a whole forest of trees!” he exclaimed.

According to Rutherford, the process of deconstruction involves systematically dismantling structures by hand and with the assistance of tools and machinery. He explained, “We basically unbuild and remove the materials in the reverse order that they were constructed, with the most labor intensive part being the final removal of all the nails and stacking, banding and transporting the material off site.”

Rutherford went on to explain the method enables ASW to create jobs, divert waste, and feed the reuse economy, keeping materials out of the landfill and putting them into the hands of artists, designers, builders, craftsmen and homeowners. He stated, “The downstream economic and social benefits to deconstruction are tremendous!”

ASW plans on creating a line of limited edition products made from the salvaged wood, such as cutting boards, coasters, trays, boxes, tables and more, all of which, like End Grain, will have a Hazel Park Raceway logo engraved into it, celebrating the provenance.

Rutherford echoed Constatine’s sentiments, saying “We’re thrilled to be involved in this project. The donation of the Hazel Park stable wood allows the history of the raceway to stay right here in Detroit and people can enjoy pieces that are not only beautiful and functional, but also hold memories.”

Already, employees and patrons of the companies have shared raceway memories, and after learning of the wood being repurposed, community members have also shared on Facebook some of their recollections, including watching fireworks at the raceway every fourth of July. Another couple expressed the excitement of having a dining table made out of the wood because it was a place they had gone to on one of their first few dates. Said Collin Graw, “We couldn’t be more pleased at the outcome of this venture and the impact it has already made on the community. We are grateful to The End Grain Woodworking Company and Architectural Salvage Warehouse of Detroit for their assistance in making this project a reality.”

Rutherford commented, “It’s rare to be contacted by a developer or contractor directly. Usually, we have to reach out and do a lot of convincing to make sure these valuable resources are not destroyed. It was a pleasure to hear from Collin Graw and experience the forward thinking and progressive attitude of Ashley Capital!” He added, “Ashley Capital was an absolute pleasure to work with. From the beginning of the experience, it was clear that they understood the value and potential of the resources at the raceway and had a real desire to support our non-profit mission and objectives. Throughout the project, Ashley Capital continued to show its commitment and support. Things did not always go as planned, but they gave us the time and resources needed to maximize the salvage potential, job creation and social impact!”

Much of the wood from the Hazel Park Raceway has already been made into furniture, mantels, frames, tables, shelves, sliding barn doors, wall facades, and other items, including custom, one-of-a-kind  pieces, all for purchase by those who wish to own a piece of Detroit history. Ashley Capital, LLC is one of the largest privately owned industrial real estate investment/development firms in the United States. The firm has offices in Atlanta, Chicago, Detroit, Grand Rapids, Norfolk and New York. Ashley’s current portfolio is over 27,000,000 square feet. Ashley is a long-term flexible owner that actively manages its properties and pays close attention to the needs of its tenants.